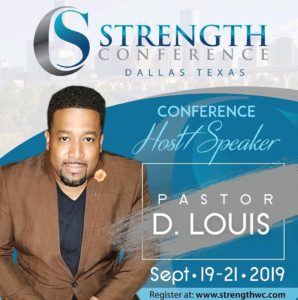 A pastor, lecturer and counselor, Pastor Detrius Louis has traveled extensively preaching and teaching the gospel for more than 10 years. Although Pastor Louis has a storied career in pastoring, he consciously chooses to never stop growing, personally or vocationally.
Born and raised in Monroe LA to the Late Supt. Donald R. Louis and Brenda Louis Jackson, Pastor Louis, affectionately called Pastor D. has a distinctive message delivery, which people from all walks of life can relate to. Pastor Louis known for his real/relevant/relatable style has allowed him to be the featured at large events ministering to all walks of life. Known for his practical use of scripture, Pastor Louis has also been featured in several columns and national publications.
Pastor Louis serves as the founder and senior pastor of Unity Worship Center-Shreveport. Founded in 2013, the campus launched its worship services in July and focuses on family-centric outreach programs highlighted by his passionate approach to worship and adherence to solid Biblical principles. Known for his uncompromising integrity, he is a trailblazer and trendsetter who focuses on relevance and innovation. Under Pastor Louis vision, Unity Worship Center developed a non-profit organization called Unity Outreach Inc. which operates to help underachieving youth by providing educational training and health awareness.
Pastor Louis holds a BS in Sports Management and a BA in Business Management with a Minor in Insurance, also while pursuing his Master of Art in Theological Studies. While having an extensive schedule Pastor Louis remains grounded as home and family is his number one destination. Pastor Louis and his wife Bridgett (Lady B) have one daughter Danica, and one son Donovan.